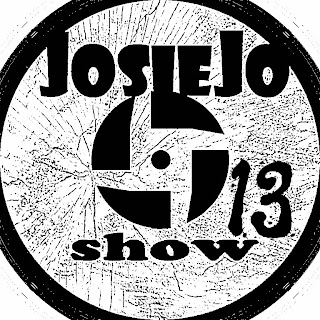 So here's the thing. It's Show 13 of the JosieJo Show and the last one that will be posted in 2013 so I need to bring you two tracks. One to take you out of 2013 and one to take you into 2014. Do we go out with a bang and float you into the new year on a soothing ballad, or do I soothe you out of 2013 and bring 2014 in with a big celebratory bang? You know you don't need me to tell you what tracks to listen to depending on your mood. All I aim to do is to introduce bands or artists that you wouldn't necessarily come across and you may even find you new favourite band.

So here's a band from London, England. The Mouth of Ghosts are alternative rock with gorgeous electronic sounds informed by lots of intelligent influences and passionate love of music. They've worked hard since being together and are intensely loyal to their fans. Their first album was released just to fans, in late 2012 and they've really dug deep to get lots of airplay and gigs in 2013. They have just released a second EP called “You Will Go Again” and the track “Wrong” which has a disturbing and beautifully rule-breaking video available on youtube, will surely continue that success into next year for them. That EP is available on soundcloud right now and links to that are available on their facebook page and it will also be available as extra content on my facebook page. It's soothing and unnerving all at the same time. A quick look round though and I discover, much to my fragile ego's delight, that my favourite of their tracks “When The Sun Sets” seems to be the track most played by other discerning and impeccably tasted people of radio land. “impeccably tasted” sort of didn't really come out the way I meant it, but I'll push on regardless and hope that you'll work out what I meant. It seems very fitting that as we wave goodbye to one randomly imposed, socially agreed time period, that I play a track about goodbyes. This track though is more about welcomes, possibilities and meetings. Just when you think everything is over, that's when the real stuff happens to watch over your dreams. The music happens in layers in this track almost like instruments coming in and out of hearing. It starts with a tinkly playfulness, but gently develops. Just when you think you have a handle on one sound it changes and moves into something else. Let the darkness reveal its possibility to you with The Mouth Of Ghosts and “When The Sun Sets”

I love the way that track ends so hauntingly. I found Mouth of Ghosts on the Straight To Your Head podcast and if you listen out in 2014 I think you'll hear from them again. So if that was the gentle goodbye to 2013 then let's bring 2014 in with some good old fashioned roots, rock, Americana power-pop. Ladies and gentlemen from Somerville, Massachusetts
The Rotary Prophets. This band is a five piece that have been together for just over a year, but they've been in the music game for much longer. How can you not love a band with a guy who plays piano, organ and lap steel? That's good old Ted Collins. The main songwriter is John Maloney and the other three members are Dave Coughlan, Ray Boyce and Damon Vrettos. They have a deep rooted love of story songs and their five song EP called “Faith-Lost-Love” is jam packed with American tales and the love of the brave.
I'm going to play you the first track from that EP. It's called “Sandusky, Ohio”, but its second, bracketted title is “Sweet Vanessa”. It's a song about an unrequited love. What I call escalator love. When you fall in love with someone you see going the other way on an escalator. That bit of your day when you fall in love with a stranger you pass just by chance, you make eye contact, you know it could never work, but just for a second “it's sweet to feel that way”. I make absolutely no apology for liking this track and oh boy, that instrumental bit in the middle eight or what ever you call that bit. Oh boy. It's just great. Get yourself swinging your partner round to a honky tonk piano The Rotary Prophets and “Sandusky, Ohio (Sweet Vanessa)”
http://therotaryprophets.bandcamp.com/
Yee ha!


So that was my Show 13, my goodbye to 2013 and hello to 2014. follow me on Mixcloud and you'll get an update when Show 14 is up, that will be the first Show of 2014 and you can't miss that. Follow me on twitter @josiejoshow for news, events, gigs and releases and check out my Facebook page for extra content and links to cool things. See if you can find me in two Tingle Jingle Mingles and enjoy yourselves wherever you are. Happy everything everyone and thank you for listening.
Posted by Unknown at 05:15