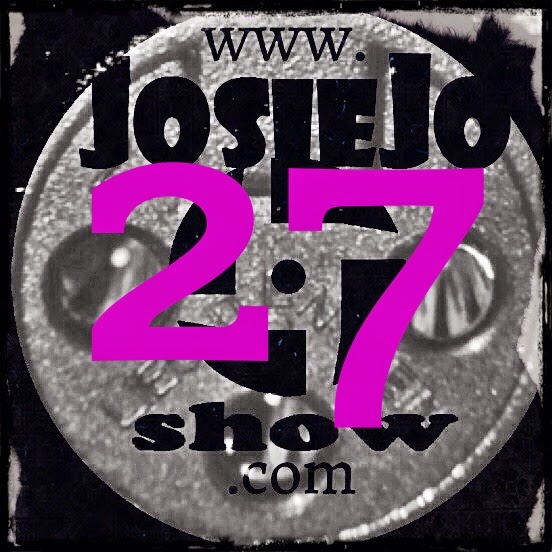 Welcome to the JosieJo Show. It's quite simple. It's two tracks by two different bands or artists that you may not have heard before. Show 26 last week was the celebration of the short song and actually had five tracks on it, but this week we're back to normal. This week I have two great yet dark tracks for you in true indie angst style and then a third song this time from perky Sarah Holburn from her excellent and newly released debut album “In Too Deep”

These tracks are going to intrigue you, romance you and then spin you around. Think dark night clubs of the 1980's were promises were made and dancing was done in semi-shrouded corners. Was that just me then? Actually it wasn't really me at all, but my cool pseudo memory of a much slicker and gothier me might have encountered that sort of thing. The real me though is just captivated by the two tracks I'm going to play you today. The first is by In Isolation a Nottingham based three piece band who are Ryan Swift, John Berry and Tony Ghost. They have a very dark indie beauty about their sound. I think that the guitar sounds like it's pacing a cage or straining at a lease. The vocal, on the other hand, is smooth and shadowy. This isn't gin and tonic, or brutally chilled chardonnay. This music is perfectly poured Guiness or Diamond White and Castaway when the club is hot and hardly lit and the room is packed with music and dancing bodies. This track “Tears” is about just that: tears. It's a break up song and which one of us hasn't felt the agony of splitting up. That awful splitting up of the vinyl collection that you never imagined you would ever have to do. The sound is sophisticated and produced with real sensitivity to the band as a whole, whilst the lyrics move me and I hear something clever in every new listen. This is due out in May/June 2014 when the video is completed, but you can hear it here first. In Isolation and “Tears”
https://www.facebook.com/inisolationofficial/app_178091127385

They ya go a pre-release play of “Tears” by In Isolation. That may not have been dark enough for you so stand by I've got something even more challenging. The next artist is Annette Berlin and along with Keith Hall she creates grungy new wave blues. This is concave, quirky and off beat. She is Bristol based and plays on the bill with St. Pierre Snake Invasion on May the 23rd at The Louisiana in Bristol. I played St. Pierre Snake Invasion way back on Show 4 and if you think that they are growly, power chordy and disturbing, wait until you hear Annette Berlin. If you can't wait to catch her in Bristol you can she her and Keith play the Audacious Art Experiment in Sheffield UK on the 26th April 2014. I'm going to play you “The Playground” because I think that it's a good introduction to her duality and the honesty of bathos in her work. She takes the happy place of the playground and shows us how it can be sinister and intimidating. It reminds me of the welsh poet Dylan Thomas and his work “Hunchback In The Park” or the end couplet of his poem “Should Lanterns Shine” “The ball I threw while playing in the park Has not yet reached the ground.”
The track is spiky and faltering. There is little flow you sweep you along. It's starts quietly in the sunshine with butterflies and then punches you in the face. I really felt that I had to work for this emotion and boy what emotion this track is full of. If Annette's sound was a colour I think it would be dark purple and black and bit like a bruise. See what you make of it Annette Berlin and “The Playground”
https://www.facebook.com/pages/Annette-Berlin/42788206965?id=42788206965&sk=app_204974879526524

Oh boy see what I mean. You're not left in any doubt that you just heard something emotional. I love its macabreness. Apparently macabreness isn't a real word. Sorry. For real words that do tell you about news, event, gigs and releases follow me on twitter under the handle JosieJo Show. For extra content go to my Facebook page and you can read this show on Blogger and www.josiejoshow.tumblr.com look out for the hundreds of JosieJo Show screen cloths that are in circulation and if you want one yourself get in touch with me josiejo@josiejoshow.com Maybe I should give you something quirky, clever and fun to end with. This is from the brand new album “In Too Deep” by the atonishingly lovely and very talented Sarah Holburn. This is “Ice-cream” Thank you for listening.
http://sarahholburn.bandcamp.com/