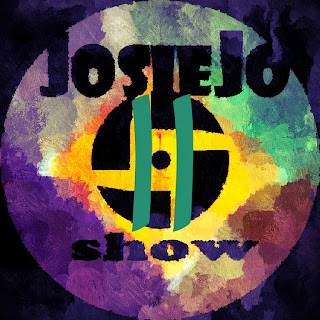 Greetings. Welcome to Show 11 of The JosieJo Show. Did you know that scientists have recently found that music can make solar panels more efficient in processing sunlight, particularly pop and rock for some reason? They think it's something to do with the vibrations, but honestly if we can capture more of the sun's energy by turning up the volume then I say “bring it on. Let's play some great tunes”. This show I have a track that has been around for a few years by a crazy Birmingham based band an a fairly new release from a UK South Coast 3 piece.

Let's start first with Misty's Big Adventure. This band is, indeed, an adventure in sound and it's big. It's an eight piece, brassy, bold and just fabulous. It's headed up by Grandmaster Gareth who is a solo artist in his own right and he gives Misty's its distinctive vocal sound. The rest of the sound is provided by the trumpet, sax, keyboards, bass, guitar and drums oh yes and Erotic Volvo as himself. Erotic is the secret weapon of Misty's Big Adventure live. A man painted in blue with many blue hands all over his crazy red onesie and he's been doing this long before there was a word for onesie. He is an important part of the band and dances to the tunes whilst visually describing the lyrics like some sort of sign language of the sub conscious. Once you have seen Misty's Big Adventure live you will never forget them. I saw them back in about 2004 I think and the track I'm going to play you is from that era, but they are still touring and I'm desperate to see them live again. You know when a band puts on facebook that little box “events”? Well when Misty's do a gig it really is an event. Get yourself to one if you can. They have a darkly funny video of the track “Aggression” that is so good that it's being screened at The London Short Film festival in January. It's available on You Tube and definitely worth a watch, but be warned it does contain somewhat adult content.

I'm going to play you a similarly dark, yet funny track called “Long Conveyor Belt” which was released on the album “Funny Times” . Every track on the album is a take on life and subjects covered include moving away from the place you grew up in to unrequited love that's sort of like stalking. This track is about life. The long trudge that is life. You know those days when you're pretty sure that someone just isn't telling you everything and you wonder really why you're getting up and going to work again? You know that feeling you get sometimes when you wash up again for the third time that day and realise that the dust is accumulating regardless of your cleaning efforts and you have to pay tax on it all, including the dust? Well this track explains all that. It starts and ends slowly with an inevitable, repeating beat as we travel on that conveyor belt and just can't get off. This all sounds depressing, but it's so jolly and funny you've just got to smile. How can trumpets and sax bring you down anyway? There is also some clever use of sound effects pacing and the voice over is hilarious. Roll up and join the carnival carousel that is Misty's Big Adventure and “The Long Conveyor Belt”
https://www.facebook.com/mistysbigadventure?fref=ts
http://www.mixcloud.com/joanne-salisbury/the-josiejo-show-0011-mistys-big-adventure-and-maths-and-the-moon/

That was Misty's Big Adventure and “Long Conveyor Belt” . I'm very serious about seeing them live. They play at The Hare and Hounds at King's Heath, Birmingham UK on Christmas Eve. That is going to be a treat for anyone that can get there and remember that video for “Aggression” https://www.youtube.com/watch?v=oTgbyl9uqYg

My next band Maths and the Moon is playing a gig even sooner than Christmas. Thursday Dec 5th 2013 you can catch this South Coast three piece at the Monarch in Chalk Farm London and it's free. This is loud guitar/wall of sound stuff from Andy Fielder, Matt Hirst and Luke Taplin and they launched their album called “Night Train Daydream” in September 2013. The title describes the sort of other worldliness of the rock that this band love. This is tunes for when the sun's gone down so it probably won't help the scientists improve the performance of solar panels, but maybe you can find another excuse to turn the volume up, because this band needs to be heard loud. I found this band listening to Nick Tann's podcast called “Is This Thing On?” Nick Tann is himself a musician but he has over 200 podcasts available packed full of great music that he's found and he's played some of my favourites like Bela Takes Chase. This great music is all there for you to find, it's just hard wading through the average stuff. Nick's done that for you with his podcast and that's how I found Maths and the Moon. I have no idea where the name of the band comes from, but it appeals both to the romantic and the engineer in me. What's not to love? They have a free download available called “Old Days/New Daze” since it's free I'll let you seek out that yourselves.
I love this track “Light and the 11th Hour” which is on the “Night Train Daydream” It starts with a classic rock feedback sound before the guitars and drums do what guitars and drums do best. This track is one of those tunes that feels like they learned guitar and started an band to get the girl and when that girl is in love with Keith Richards you can see how that would be a good plan. It's raw and rocky and even quite funny. I like it. Maths and The Moon and “Light and the 11th Hour”
http://mathsandthemoon.bandcamp.com/album/night-train-daydream-2


There you go. Two tracks I like presented to you for your enjoyment. If you like what I do listen to the other shows on Mixcloud. Easy links to those can be found on my webpage www.josiejoshow.com and there is always extra content on my facebook page and follow me on twitter @josiejoshow for news, events, gigs and releases. Now back to that long conveyor belt people you have lives to enjoy. Thank you for listening.